I just got my new toy: an iPad 2. So this post is really to see if I can use this new toy for the blog. Hopefully I can find a little more time to keep this blog up to date.

Oh, and I’ve changed the theme as well.

This a picture taken with the iPad camera. 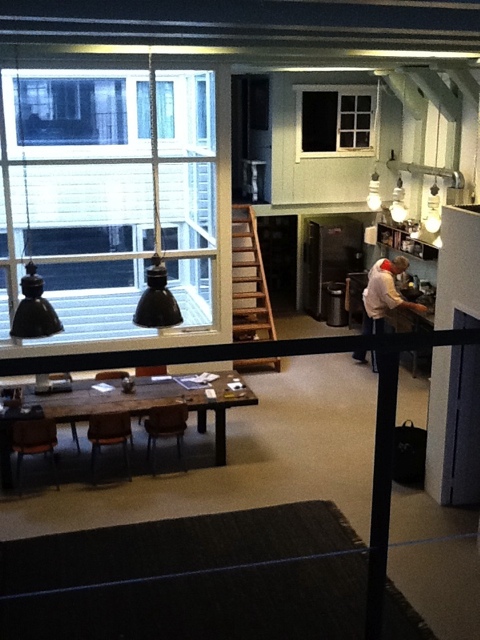 So I was rummaging through my stuff, like you do, and I realised this corner of my web has grown cobwebs.

I (we) are still here, although in another location. The boats are sold, and we’ve settled in quite nicely, thank you.

They are just now taking down the scaffolding which has been outside for the last six weeks, while the exterior of the house was painted. It’s looks real pretty now. Now all that’s left to do, is finish the (2nd) bathroom. We’ve been postponing that, but maybe it’s time to get started. 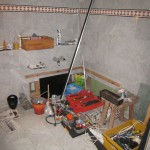 We’ve signed the contracts, for the new apartment as well as selling the houseboats. Next week we’ll move to my houseboat. We’re getting the keys for the new place at the same time, so we can start remodeling and redecorating the new place. It’s going to be a busy time the coming weeks. All being well, we should be in the new place before Christmas. We’ll see…

We’re going to move house(boat). The houseboats are for sale (see here, and here). Although we have really enjoyed living on the Amstel, we feel it’s time for a change of scenery. We’re looking at a property (in the center of Amsterdam – we’re not ready for the country life yet) but nothing’s finalised so far.

And yes, the Ayor is for sale too. Exciting times… 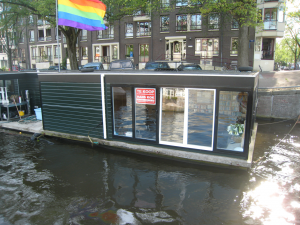 Living in an A1-location like we do, we sometimes get requests to film on our houseboat. Sometimes we let them. This was the most recent effort. Rest assured, the special effects were just that: effects. And we don’t even have guineapigs…

To see what I’m talking about here, click the image. 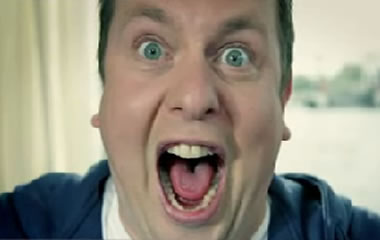 We’ve got a garden. It’s a dutch thing, like an allotment, but not just for vegetables – it’s a place to relax and get away from the busy city. In Russia and the former DDR, it would be called a dacha. It’s about 20 minutes cycle ride from the Amstel.

On the map below you can see the complex. We’re some where in the middle there:

Larger map
Click the thumbnail below to see some pictures

Today, we’re in Brighton, on our way home again from a short break in the South of England. Last week we were in Cornwall: beautiful countryside, nice quiet (gay!) campsite. And now we’re having one last day in Brighton, before we travel home again. More details and pictures when we get home.

For my birthday, Jan got me a trip on the original Fokker F27 (Friendship). We finally went on the trip today (instead of last week, when it was cancelled due to bad weather). The first production Fokker F27 (also known as Fokker Friendship) flew in November 1955, 50 years ago last year. The Fokker Heritage Foundation has acquired the second aircraft sold commercially. It was originally sold to Air Lingus, after that it was in service in Australia and New Zealand. It returned to the Netherlands to become a museum exhibit, but a working exhibit.

The Fokker Heritage Trust keeps this aircraft in a airworthy state, and organises regular outings with it. We went on a daytrip to the island of Texel, one of the dutch islands on the Northsea. The Fokker Friendship (named “Anthony H.G. Fokker” by the way: the name of the founder of the Fokker Aircraft factory and also my fathers name) has its base on the air museum ‘Aviodrome’, which shares its airstrip with the airport of Lelystad. The flight from Lelystad to Texel takes only 20 minutes, but it is more about the whole axperience. As an added bonus, the airstrip on Texel is one of only a very few that has a grass-only runway.

The whole experience was wonderful: the aircraft is almost completely as it was originally. Apart from the required safety-updates. The crew, which are all volunteers, were dressed in period costumes, and the airplane itself is painted in the old NLM (Nederlandse Luchtvaart Maatschappij) colours.

You can see the plane landing and taking off on the website of TexelAirport (date 2006-8-19) – that was quick!

A lot of people have shown a lot of interest in my recent gall stone operation. Fortunately, everything has been plain sailing so far. I’ve not had any problems or complications, I feel fine, and the scars are barely noticable. I’m amazed myself, that everything went as smoothly as it did. I must say, the hospital and/or surgeon did a grand job. I’ve got an appointment next week to check everything is OK.